Understanding The Grading Systems Of Climbs In The UK

Understanding The Grading Systems Of Climbs In The UK 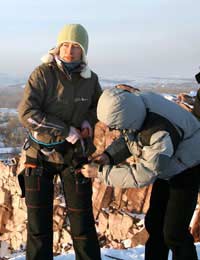 The UK has a recognised grading system for each of its climbs in the UK. This allows you to gain a perspective on how easy or difficult a climb would be and to tackle climbs that are within your current level of ability.

It also enables you to move on to more difficult climbs at the right pace and level should you be looking to improve your climbing technique or to push yourself a bit harder.

Additionally, you can choose an easier grade of climb if, perhaps, you’re going climbing with your children or with less experienced climbers.

The UK system includes both an adjective grade and a technical one and it’s useful to know what each one means. The adjective grade gives you an indication of how easy or difficult a climb is. When it comes to evaluating that, it takes into account how strenuous the climb is likely to be, how protected you will be and the amount of exposure to come up with an overall grade. The adjective grading system is as follows from the lowest to the highest in terms of overall difficulty:

Each numerical grading, describes the level of technical difficulty for the most difficult move, referred to as the ‘crux’ on the climb. If, however, you are climbing a multi-pitch route, then a technical grading will be given for each specific pitch. For example, 4a, 4b, 4c, 5a, 5b, 5c…..etc.

If, for example, you are attempting a climb which might not be too strenuous but has a higher degree of technical difficulty, it might be graded as VS 5A whereas a particular route that might be very strenuous indeed and with very limited protection might end up with the classification E2 5a.

The general rule is that if you’re looking to raise your adjective grade, which is what keen climbers looking to push themselves will be trying to achieve, then it’s usually better to start off by looking at the higher adjective grade in the context of also choosing a higher technical grade as the protection factor is usually better, although that can in no way be guaranteed.

Unless you’ve already become somewhat familiar with the grading system, this might all be a bit baffling at first although the more you follow it, the easier it becomes. However, there are added complications in that grading the difficulty of a particular climb can be very subjective and what might seem difficult to some climbers may seem severe to others of a similar standard climbing alongside.

Furthermore, the adjective grade may differ in terms of how you perceive it to be from one area of the country to another. For example, a HVD (Hard Very Difficult) climb might be viewed very differently in say, the Cairngorms in Scotland as opposed to a HVD climb in the Peak District, for example. And remember that weather factors will also play a part in the difficulty.

Other Things To Remember

However, it will become easier to gauge the level of difficulty as you become familiar with the grading system more and you can match that against your own perception of the climb after you’ve completed it. So, in effect, you can modify it to suit your own particular level of ability. For example, you might feel a HVD classification is actually more of an S climb so you can adjust the actual grading system to suit yourself according to how you think you’d cope.

Furthermore, there are plenty of online resources which will feature articles of climbers’ own perceptions of a particular climb you’re thinking of tackling yourself. These will also often include photographs so sometimes it’s useful to use that as an additional resource in order to gauge whether a climb is going to be suitable for you and for your entire climbing group, if applicable.